Regina Ibrahim, has kindly bought my two books (Doubt & Bitter) and have written a lovely review on the books. Here is the review   Thank you Regina 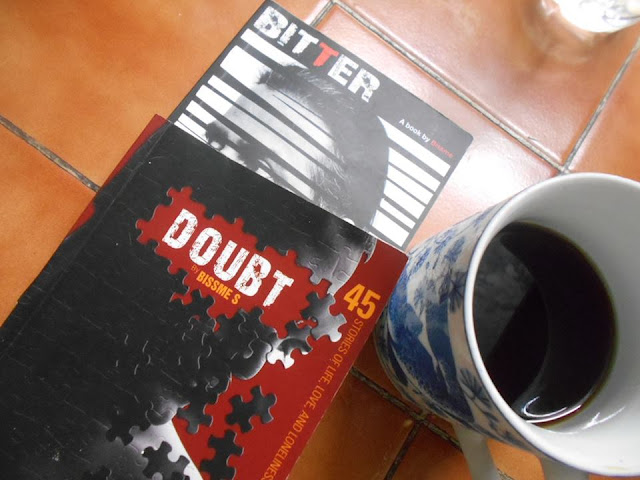 Verdict: Harus dimiliki oleh pengemar FIKSYEN.
Posted by bissme at 10:39 AM No comments:

I am highlighting a story from my book Bitter that is being sold RM 21. Here is the short story 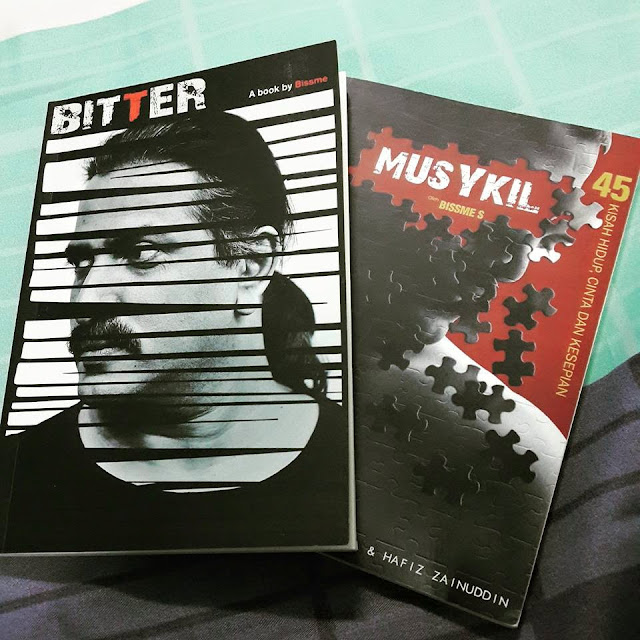 2) Far From Perfect
By Bissme S

The first time I saw her was in a television talk show. She was supposed to travel around the world in 365 days. She was supposed to be the first woman in the country to accomplish this.
“I did not complete the journey,” she confessed to the pretty host of the talk show.
“I failed to create history.But I found something bigger. I found God.”
Her boat did leave our country. But she did not reach her destination. There was a violent storm. There was lightning and thunder. The ocean was in a fury.She was thrown into the ocean. Everyone thought she had died. But she did not die. Instead, she washed up on a deserted island. She was all alone, a castaway. She was waiting to be rescued. But the rescue team could not find her. She was lost.
“I was lonely,” she said
“I was depressed. I missed my husband. I missed my friends. I wanted to kill myself. But killing yourself is not easy. You need tremendous strength to end your life.”
She survived on fruits that she found on the island.
“I thought I will die miserable and all alone on the island,” she said.
The moment she learned she was pregnant, she knew she had to find a way to escape the island. She had to bring her child to civilization.
“I cannot let my child die on this island,” she said.
She built a raft made of wood salvaged from the shore and bravely sailed into the big ocean.
“Before I began my sailing, I did one thing I had never done in my entire life,” she says.
“What was that?” asked the pretty host of the talk show.
“I prayed hard that God will grant a safe journey to my unborn child and me,” she answered.
“That was my first time that I had prayed…That was the first time I believed God existed.”
She grew up in a household where praying was seen as a waste of precious time. Her father always said: “Give a man a fish and you will feed him a day but give him religion and he will starve to death while praying for a fish.”
For the first time in her life, she did not listen to her father whom she loved, admired and respected. She kneeled down and begged for a happy ending from the almighty God.
For days,her raft floundered in the big ocean. She was hungry. She was thirsty. She was dying.
“But God did not let me die,” she said.
“God is great. God loves me. God had given me the happy ending I wanted.”
A cargo ship noticed her tattered raft and she was rescued.  Her husband was overjoyed to have his wife in his arms again. Adding sweetness to their reunion is when he learnt that she was pregnant. Since the incident, she and her husband have not left God alone.
“I am glad that I got stranded on island,” she said.
“Through this ordeal, I learned about God and his greatness. I owe my life to God. I owe the life to my child to God. I owe everything to God. What happened to me is a miracle from God. I will worship God till my last breath.”
The audience in the talk show was on their feet, giving a standing ovation to the woman and what she had said.

*****
A year after her appearance at the talk show, I was working for her. I was her maid. She liked me.
She said: “You are wonderful. You have everything under control. I am lost without you. I am lucky to have you.”
I showed my sweet smile. Humbly, I said: “No Madam, I am lucky to have a kind employer like you.”
She likes to believe she had gone to a maid agency and got me.  But the truth is a totally different story.I paid her old maid some money to leave her and her family. That would force her to find a maid.I predicted she would turn to her old maid’s agency to get her new helper and I was right.
I paid someone in the agency a lot of money to make me as her maid.I was obsessed with her. I wanted to be in her life...I wanted to be in her house…I wanted to meet the child that changed her life.

*****
I remember the first time I stepped into her house. She looked so different from the television interview. Her hair was thicker and she was thinner.  It was obvious she had spent some time at the gym.
Her husband also looked different from the television interview. His hair was getting less and he has put on some weight around his waist.Of course,I was introduced to the person who changed her life dramatically…the person who motivated her to leave the island where she was stranded … the person who made her believe in God. Her baby was just learning to walk.
“I bought him a present… Can I give him the present?” I asked.
“Of course, you can,” she answered
My present was a soft toy unicorn. Her son smiled wide on seeing the unicorn.
“I think you have won the heart of my son,” she said.

*****
After a year staying as her maid, I thought it was time to open her eyes to the truth.Everything was planned carefully. It was on the evening September 6, she and I were at the porch, playing with her son. Out of nowhere, two strangers climbed over the gate of the house, grabbed her son from my hands and got into a car that was waiting outside the house.
“Call the police… Call the police. My son has been kidnapped,” she shouted with tears streaming from her eyes.


I pretended to have tears in my eyes. Inside, I was jumping with joy. The gangsters I had hired had done an excellent job. I was whispering to myself:  “Save your tears, Madam. This is only the beginning of your tragedy. You have more tears to shed.”
Posted by bissme at 11:15 AM No comments:

Today a reader named Hilal Adnan has written to my email  to talk about my book Bitter. Here is what he says: 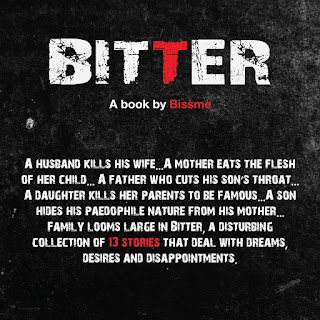 "Bitter. The word itself explains many if not most of the strings of stories attached in the book. In these stories we bear witness the worst of unfortunate events through the secrets, desires and profound disappointments that takes place at the unlikeliest turn. The stories are told in a rich crimson context and highlight the often twisted behaviour of characters that animates the stories through fate, choice, family and despair.

From a daughter tranquilly painted her father who committed suicide to a mother who eats the flesh of her own child, the reader is treated to a whirlpool of unexpected outcomes and awaken into realizing the fact that there is no such thing as a happy ending. Bissme’s dark themed short stories are very intriguing to say the least but not recommended for the faint hearted.

Each story is interrelated in its own way. I hope Malena rings a bell."

Thank you for the lovely compliments.

Posted by bissme at 3:25 PM No comments: